Motto: “Every time I jump into the water I feel like I’m coming home / It’s what you do while no one is watching that is most important / Don’t be afraid of failure; this is the way to succeed”

This black and red bikini is part of the exclusive Arena Iron Lady capsule collection. It features the Iron Lady logo and design on the front in red plus contrasting straps with a tie back.  It is prefect for training or just everyday wear on holiday. also available are a swimsuit, T-shirt and rucksack

Overall World Cup winner five years in a row since 2012

Set 15 SC world records in the space of 16 months between August 2013 and December 2014, including 6 in a five-day period during August 2013, and 4 in different events at the 2014 World SC championships in Doha 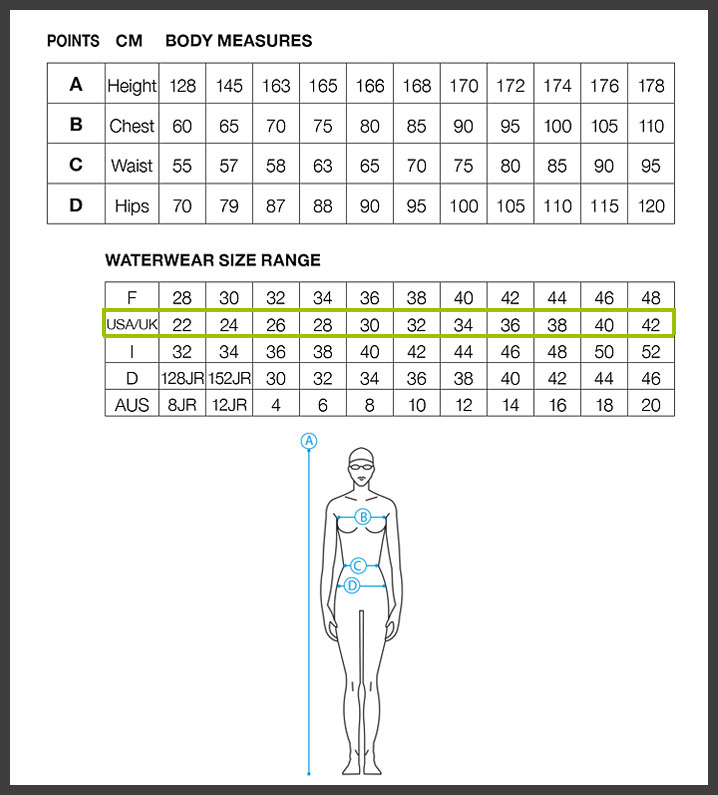 Royal Mail are actively monitoring the situation.  For Royal Mail updates regarding UK deliveries please click on the link below:

For international customers Royal Mail’s latest information can be found via the link below.  They are keeping individual country information as up to date as possible. They are working with airline and postal/courier partners across the globe to maintain service and provide updates. Customers can expect delays to normal services, on a country by country basis and updates will be posted on the Royal Mail website as they become available.

Orders are usually dispatched at the latest the next working day. For deliveries to a UK address we normally use Royal Mail Signed For, UPS or Hermes.  Special Delivery can also be selected at checkout for more urgent UK orders.1st class is normally delivered in 1 -2 working days and 2nd class 3 – 5 working days.

* Orders must be received by 1pm Monday to Friday

Orders are usually dispatched at the latest the next working day. For international deliveries we use Royal Mail Air Mail. Air Mail can be one of either Tracked, Signed For or Tracked & Signed For. The delivery method selected is dictated by the options available in the delivery country. If you require an order urgently we can also use UPS or FedEx.  If it is not available for your delivery country and you would like a quote please contact us at [email protected] and detail the items you require and the full delivery address including any zip codes.

Delivery starts at £10 and is weight dependent. To get a delivery price just add the items you are wanting to your basket, go the the shopping basket page and select your delivery country.

Standard Air Mail does not have a guaranteed delivery date. If you require delivery by a specific date please contact Customer Service for a courier quote

Zone 2 is any country which is not part of the UK or listed on World Zone 1. Delivery starts at £12 and is weight dependent. To get a delivery price just add the items you are wanting to your basket, go the the shopping basket page and select your delivery country.

Standard Air Mail does not have a guaranteed delivery date. If you require delivery by a specific date please contact Customer Service for a courier quote

What happens if I am out when the courier comes?

Orders require a signature to acknowledge receipt upon delivery. The signature of the person accepting delivery at the delivery address will be proof that safe delivery of the order has been received. If no person is available to accept delivery, the courier, Royal Mail or the destination countries postal service will leave a ‘While you were out’ card to let you know that they have been, and which course of action they have taken.

Can I order a delivery to go to my place of work, or another address?

Yes, of course. When ordering, simply complete the delivery address you require. We will also require your billing address in order to process payment. Please note that it is your responsibility to ensure that the delivery address is ready and able to accept delivery of the product(s). Once a parcel has been signed for at the shipping address it is considered delivered.

Can I cancel or change my order?

You can cancel your order within 28 days of receipt. To receive a refund please follow the steps in our return options link. If you contact us to request a cancellation or change the size / colour before the order has been dispatched we can process an immediate refund or change the items (if you require a different item at a different price a separate order may need to be placed) . If however the item/s are already on their way your order cannot be stopped and will be delivered to you.

My item has not arrived, what should I do?

If your item has not arrived please contact us to let us know. Sometimes, unfortunately, items do take longer to arrive than expected especially if it is an international delivery.

• If the item is a European delivery it has to be give 20 working days to arrive.

• If it is a worldwide delivery outside Europe it has to be given 25 working days to arrive.

• We try to dispatch all items as quickly as possible but once a parcel leave us we are at the mercy of the delivery companies and international customs offices and whilst we can normally locate a parcel within the delivery process we cannot speed up its progress.

If you are experiencing a problem please contact us at [email protected] detailing your order number and issue.

A claim for an undelivered item must be made within 6 months of the date of dispatch.

Do I need to pay any import duties or taxes?

We are happy to deliver to you anywhere in the world but please note that delays may occur at the point of customs/duties, these delay are beyond our control.

Any customs or import duties are levied once the package reaches its destination country. Additional charges for customs clearance must be borne by the recipient. We have no control over these charges and cannot predict what they may be.
Customs policies vary widely from country to country; you may want to contact your local customs office for further information.

If your delivery address is outside the UK you may be liable to pay import duty / tax.  Any duties / taxes are not included in the product or shipping price.  For orders shipped outside the UK any UK taxes will be removed from the product price before you complete checkout.

The dates below are the LAST recommended posting dates as advised by Royal Mail.  Please note this does not guarantee postal delivery before Christmas and we would recommend completing any Christmas orders well before these dates. 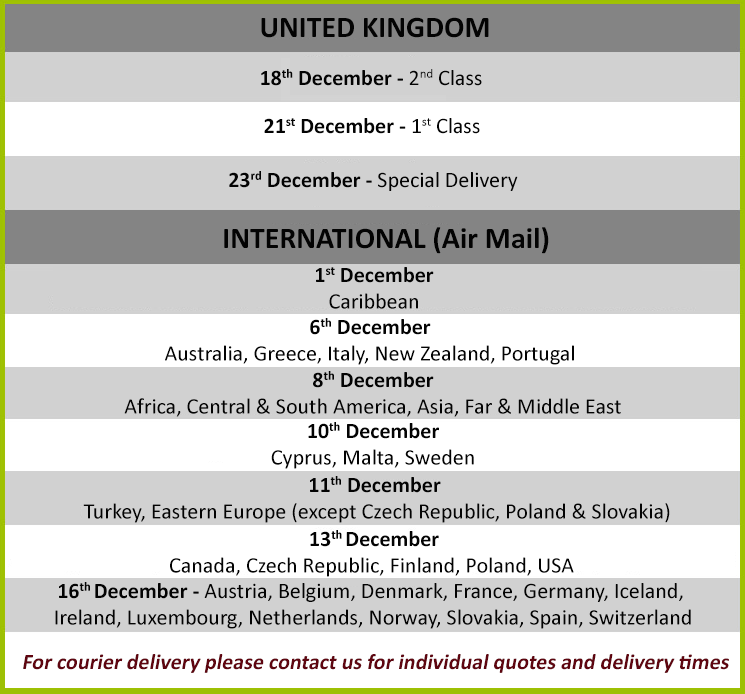 Countries we do not currently sell to

We ship products worldwide but unfortunately not currently to the countries listed below:

There are no reviews yet.

20% VAT is included in prices where applicable.  For deliveries outside the UK VAT is removed at checkout. Any import duties / taxes are payable by the recipient and are not included in the shipping or product price.